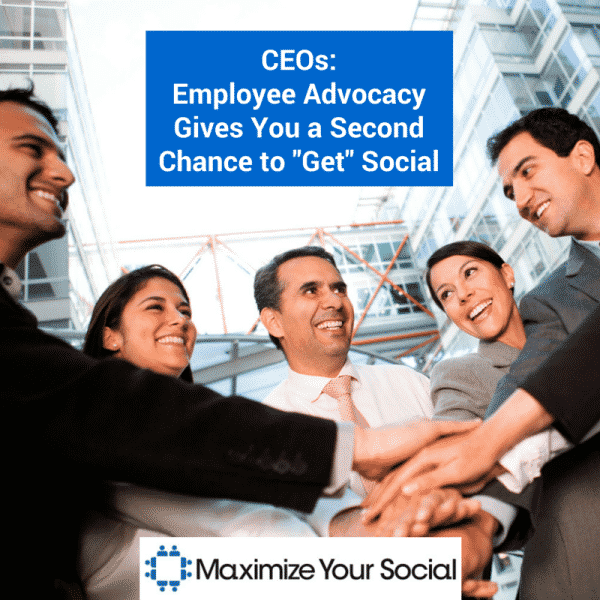 Much has been said about the need for CEOs to be more active in social media and how few of them are. It is safe to say that in 2015, social media, as a medium that is being consumed by the public in one form or another, is as mainstream of a media as television, radio, traditional media, and the Internet are. CEOs and executives shouldn’t be on social media because someone told them they had to, and they certainly don’t need to participate as often as I might. However, it is a strategic enough media that the leadership in any enterprise or company large or small should at least have a general working knowledge of, especially as social utilized inside any business begins to expand beyond marketing with the evolution of social business.

Employee advocacy has become the darling of social media marketing programs who want to expand the reach of their social marketing beyond that of their singular corporate or brand entity. (Note that if you are interested in learning more about employee advocacy and how to implement a program, please read my free ebook on How to Build an Employee Advocacy Program.) The emergence of social selling has given marketers, and those visionary sales leaders who see the potential value that social media has as an extension of their sales process, a good place to begin such programs. However, not only does the implementation of a successful employee advocacy program require departments to work together as in this case, it also requires an engaged workforce who are positive about your company and the culture it represents to put your brand’s best foot forward in social. CEOs need to be on the leadership team of any employee advocacy program not because they need to lead by example, which would obviously be nice, but to understand the power of such a program and ensure that it is implemented in a way so that it becomes a transformational force for the company, not something which amplifies ill will between departments and amongst employees.

A marketing department tweeting rogue on Twitter is one thing; an internal program asking your employees to tweet on behalf of your company represents a company-wide and potentially culture-changing activity that CEOs and executives need to be invested in and leading for the sake of not only a successful implementation, but more importantly to understand and help positively navigate the deep impact that such a program can have internally as well as externally.

For those CEOs that never joined the social revolution, employee advocacy beckons you to lead your company down the right path and “do” social right. As I like to say, you are never too late to join and become a participant on any given social network. I thought I was late to the party when I joined Twitter in November of 2008! Now is the time to invest.

I was recently interviewed on Brand Quarterly about this very subject of employee advocacy for CEOs and executives. If you’re interested in learning more about my views on this critical social business subject, please read Employee Advocacy Gives CEOs A Second Chance To Do Social Right.

Have you seen CEO or executive participation in employee advocacy programs yet? Please share your views and help move the conversation forward.

Maximize Your Social – The Book

We are located in the heart of Orange County, California, Irvine, one hour from San Diego to the south and one hour to Los Angeles in the north.

Need help with your social media? Tell us all about it by filling out our contact form.

Want to keep up with Maximize Your Social and Neal Schaffer? Follow us across social media!